Research conducted at the Missoula Fire Lab has found that the amount of radiant heat in wildland fires is not sufficient to ignite fine fuel particles such as needles and grasses.  These fine fuels are highly efficient at convective heat transfer, so any amount of airflow can easily offset the radiant heat generated by the fire.  As a consequence, fine wildland fuels do not ignite until bathed by the flame. As radiant heating has been assumed to drive ignition in wildland fires as it does in structural fires, ignition by convective heating is not well understood.

Understanding the ignition process due to convective heating will allow for better prediction of the transition from surface to crown fire and crown fire spread, two aspects of wildland fire behavior that are largely misunderstood. 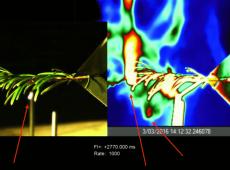 Side-by-side images of grand fir needles taken with high-speed visual and infrared cameras. The branches are instantaneously heated by 800°C (1500°F) air, similar to the heating experienced during a fire. The photographs show dramatic jetting of hot gases (red arrows), some of which are flammable.