Tree mortality following fire is influenced by multiple factors. Many coniferous species have life history traits and characteristics that can greatly enhance their resistance to fire. These traits include deep root systems, thick bark, and distinctive crown features such as large buds or protective woody structures around buds. Douglas-fir (Pseudotsuga menziesii (Mirbel) Franco) and ponderosa pine (Pinus ponderosa P. & C. Lawson), for example, are known for their fire tolerance in large part due to thick insulating bark that develops with age and protects the inner cambium from heat injury. In addition to species specific traits and tree age, mortality following fire depends on the type and degree of fire-caused injuries, initial tree vigor, and the post-fire environment. One important component of the post-fire environment that often confounds predictions of delayed tree mortality is phloem-feeding bark beetles that are attracted to fire-injured conifers. Trees that are only moderately injured by fire and capable of recovery can be subsequently attacked and killed by bark beetles.

Bark beetles within the genus Dendroctonus (Coleoptera: Curculionidae, Scolytinae) require live phloem for successful brood production. When beetle population densities are high, the defenses of healthy host trees can be overwhelmed by the simultaneous attack of many beetles. At low population densities, trees stressed by a variety of factors are initially attacked, and some species, including the Douglas-fir beetle (D. pseudotsugae Hopkins), preferentially attack downed trees. The Douglas-fir beetle has been consistently associated with fire-injured trees, often attacking larger trees with moderate to high levels of basal bole injury and light to moderate levels of crown injury, with attacks declining only in completely defoliated trees.

Knowledge of the effects of fire injury on tree survival is imperative for prescribed fire planning and post-fire management, including salvage, following both wild and prescribed fires. A large body of research describing the complex interactions among fire injuries and tree survival exists, and has been used in the development of predictive models for a variety of tree species. No models have been developed, however, for predicting the probability of delayed Douglas-fir tree mortality that includes the interaction of fire injury and Douglas-fir beetle attack. This information is important because trees that are only moderately injured by fire and capable of recovery can be subsequently colonized by bark beetles and killed, confounding predictive models that do not include this second order fire effect. Additionally, standardized methods are needed for collection of fire injury data most useful in predictive models. 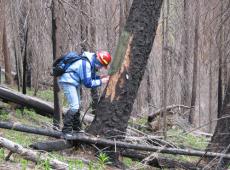 Collecting emerging Douglas-fir bark beetles from a tree that burned in the Moose Fire.

The mortality and beetle attack modeling results are presented in an article in the Canadian Journal of Forest Research:

Data from this project was also used to for the following publications:

A synopsis of the results was presented at a post-fire mortality workshop in 2006.