A team of four individuals, supported through the U.S. Forest Service International Programs, convened in October 2014 to conduct a fire regime assessment in Eastern Province of Zambia. The team, which included a multinational assemblage from the United States and Zambia, was tasked with the following objectives:

1) gain preliminary insights into the current status of fire management and fire use in the province,

2) assess the role of fire in the regeneration and maintenance of the dominant vegetation present in the terrestrial ecosystems of the province, and

The Eastern Province of Zambia is dominated by vast areas of fire-prone vegetation including woodland savannas and grasslands. Anthropogenic bush fire is a frequent process on the landscape, estimated to annually burn approximately 25% of Zambia’s land base. Fire is a readily available and inexpensive tool that impoverished rural populations in Zambia use for a multitude of traditional activities such as clearing indigenous vegetation for agriculture, improving pastures for grazing, burning crop residues, hunting, and stimulating the growth of non timber forest products. The presence of fire-adapted plants and paleoecological studies indicate that fire has been used by humans in this landscape for millennia and has helped to shape much of the existing Zambian landscape. Fire is used as a tool by the Zambian people throughout the dry season, but the effects can be significant late in the dry season when herbaceous fuels are fully cured and fires can quickly spread into adjacent villages or protected areas.

The team travelled 1,550 miles (2,500 km) through Eastern and Lusaka Provinces to meet with officers from the Zambia Wildlife Authority (ZAWA) and Zambia Forestry Department (FD) who manage protected areas including national parks, game management areas, national forests, and local forests. The team met with district chiefs, village leaders, and community members throughout Eastern Province to document the use of fire by villagers. The team also met with various ministry and government officials as well as other stakeholders in Lusaka, the capital. 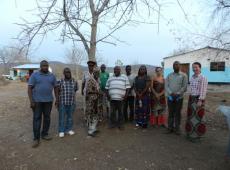 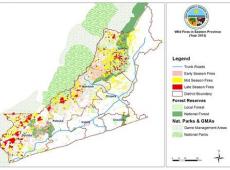 Seasonality and aerial extent of fires as detected by MODIS Active Fire Data. 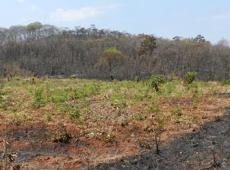