Experimental evidence now shows that flame impingement is required for ignition of fine fuel particles responsible for the spread of wildland fires. However, the characteristics of the non-steady flame zone that produce convective heating of fuel particles has not been studied. It is not known how to describe, qualitatively or mathematically, the flame dynamics that allow forward spread of wildland fires.

Flame structure studies were conducted and particle heating signals were evaluated by FFS Research Forester Mark Finney and collaborators from the University of Maryland, University of Kentucky, and Los Alamos National Laboratory in laboratory fires spreading through laser-cut cardboard fuel beds and in stationary flames from gas-fed burners. High-speed video and infrared imagery were used to capture flame dynamics to compare with thermocouple measurements.

Flame structure and dynamics were found to be remarkably similar to heated boundary layers that are well known from fluid dynamics research. Flame fronts in stationary and spreading fires were seen to divide into “peak and trough” patterns produced by instabilities of air inflow to the flame zone produced by the upward buoyant force. These instabilities result in paired-streamwise vortices (Go rtler vortices) that force flames down into the fuel bed at convergence zones. Secondary instabilities result in apparent forward pulsing that extends flames into the unburned fuels at frequencies that appear to scale inversely with flame length but proportionally to wind speed. Results indicated that buoyant dynamics of the flame zone appear to govern the time-varying heating of fuel particles and the distance ahead of the front that heating takes place. 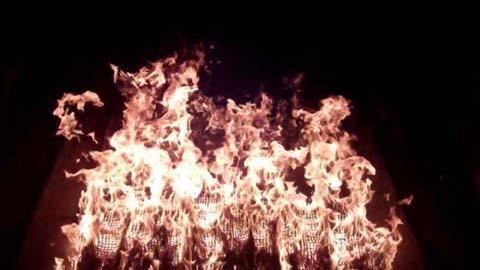 Downwind view of fire spreading through laser-cut cardboard fuel beds in the Missoula Fire Sciences Laboratory’s wind tunnel. The U-shaped depressions from left to right are related to the presence of Görtler vortices that force the fire downward into the fuel bed.