Lodgepole pine-dominated forest is the third most extensive forest type in western North America, covering 15 million acres in the western United States. Over much of this extensive range, surprisingly little is known about historical fire regimes. While these regimes are commonly characterized as infrequent and stand-replacing, like those found in portions the Greater Yellowstone Area, evidence is mounting that lodgepole forests also sustained low- to mixed-severity fire regimes that resulted in complex forest age structures. In addition, we know little about the consequences of historical fire in lodgepole forests on vegetation composition, structure, and fuels or how they vary across landscapes in response to topography and microclimate. Understanding the causes and consequences of spatial variation in historical fire regimes is important for managing lodgepole forests across the west and for predicting how fire may shape forests in the future.

The Tenderfoot Creek Experimental Forest (TCEF) in central Montana is typical of high-elevation lodgepole pine forests east of the Continental Divide in the Northern Rocky Mountains and is occupied primarily by stands of lodgepole, sometimes mixed with Engelmann spruce and subalpine fir. A pilot-scale fire history study conducted at TCEF in the early 1990s suggested that that about half the forested land is multi-aged. It is well documented that extensive high-severity fires select for cone serotiny in pines, but anecdotal observations suggest that only half the lodgepole at TCEF have serotinous cones and fire scars are common so mixed-severity fires may have been more common than previously thought. Written records of fire at TCEF include only the past century and post-date a time of great change in land use and hence fire regimes. Fortunately, tree rings provide a multicentury record of fire and we have successfully used them to reconstruct historical mixed-severity fire regimes in lodgepole forests elsewhere.

We will answer the following questions: (1) How and why did historical fire regimes vary across TCEF over the past several centuries? (2) How did this variation drive modern fuel and forest structure, composition, and cone serotiny? We have completed one field season thus far and are currently processing the wood samples and data. 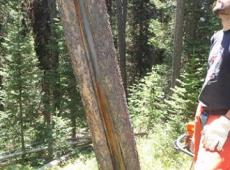 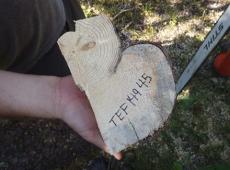