The lack of co-located, multi-scale measures of pre-fire fuels, active fire processes, and post-fire effects hinders our ability to tackle fundamental fire science questions. The lack of such datasets became clear following discussions within the Core Fire Science Caucus, a group of 30 scientists that meet periodically to discuss fire behavior research, identify knowledge gaps, and outline a strategic direction for continued research. One outcome of the Caucus interaction resulted in a series of collaboratively instrumented and collected fire and fuels data on prescribed fires in the southeastern United States in 2008 and again in 2011. This research effort was called the Prescribed Fire Combustion and Atmospheric Dynamics Research Experiment (RxCADRE). RxCADRE enabled scientists to develop processes for collecting complementary research data across fire-related disciplines before, during, and after the active burning periods of prescribed fires with the goal of developing synergies between fuels, fuel consumption, fire behavior, smoke management, and fire effects measurements for fire model development and evaluation. Funding was obligated from the Joint Fire Science Program for a third series of collaborative prescribed burns carried out in the fall of 2012.

Small- and large-scale field research data sets that document integrated fire behavior, emissions, and other fire effects, and that focus on individual aspects of fire dynamics (i.e., fuel characteristics, wind, surface fire behavior, fuel consumption, fire effects, emissions) are, at present, inadequate to help understand the complex interactions of fire and the atmosphere. Advancement in the core fire sciences requires an integrated research approach to further our understanding of fire and atmospheric dynamics that may vary by the scale of the burn. The 2012 experiments will study complex interactions on small replicate and large operational prescribed fires that range from 5 to 500+ hectares. Small replicate (≈5 ha) fires will occur in a simple grass fuelbed and will be hand-lit with a single, uniform strip head fire and monitored from both the air and the ground to produce a unit-scale, high-resolution fire progression and heat release data set for validating fine-scale fire behavior and fire effects models. This experimental plan will target the kind of fires and monitoring data needed to validate computational fluid dynamics-based fire behavior simulators such as WFDS and FIRETEC, next generation fire models. This project will provide a quantum improvement over the Australian grassland fire experiments of Cheney et al. (1993), the only other comparable validation dataset (Mell et al. 2007). The operational prescribed fires will also be in a simple grass fuelbed, but will provide data to develop, modify, and/or evaluate large-scale fire behavior, plume generation, smoke production, and other fire behavior and fire effects models.

For more information on goals and methodology, please download the RxCadre Full Project Summary and other related material.

Measurements have been conducted from Alaska to Florida.

RxCADRE Update: Funding has been allocated. Site prep has begun. Research burns were conducted in 2012.

Data Management: Bryce Nordgren, Dan Jimenez, and Casey Teske established an informal and formal repository with a user’s manual. The informal repository was established to share data immediately following each fire. The formal repository has been configured to accept all metadata and data from the RxCADRE burns for 2012, 2011, and 2008. A repository user’s guide has been prepared and distributed among RxCADRE members. All discipline leads are responsible for quality assurance and control of data and metadata. They are also responsible for uploading and managing data and metadata by August 31, 2013. Any individual using the data will be required to cite the funding agencies. Finally, once all data is uploaded, the repository will be transferred to a permanent site managed by the U.S. Forest Service in Kansas City.

Research Updates and Overview: A special session was held at the 4th Conference on Fire Behavior and Fuels held in Raleigh, North Carolina, February 17-22, 2013. Presentations can be viewed and downloaded. 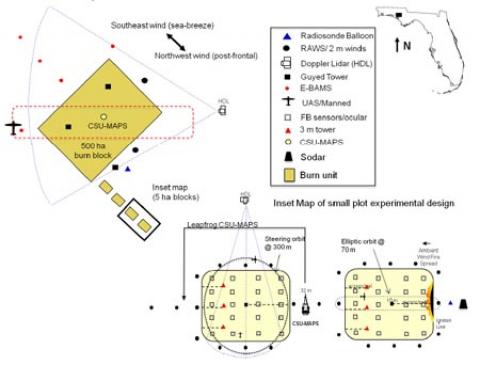 RXCadre-Measurements from the quad copter and G2R unmanned aerial systems