A Spatial Database of U.S. Wildfires

Wildfire occurrence records provide baseline information that is essential for wildfire management and research in the United States. However, there are multiple federal, state, and local entities with wildfire protection and reporting responsibilities in the United States, and no single, unified system of wildfire record keeping currently exists. To conduct even the most basic interagency analyses of wildfire numbers and area burned based on official and final fire reports, one must harvest records from dozens of disparate databases with inconsistent information content. After pooling data from different sources, one must check for and purge redundant records of the same fire, including records of multijurisdictional incidents with responses reported by several agencies or departments.

Due to the difficulty of compiling wildfire occurrence data from the numerous reporting systems, analyses of United States wildfire activity are often based on final fire reports from a single federal agency, like the U.S. Forest Service, or rely on summary statistics from the National Interagency Coordination Center (NICC), which keeps running tallies of fire numbers and acres burned throughout the year. The NICC estimates are based largely on daily situation reports from participating wildland fire dispatch centers, not individual fire records, and can only be spatially resolved to the reporting unit.

The current release is the fourth update of a publication originally generated to support the national Fire Program Analysis (FPA) system. The following core data elements were required for records to be included: discovery date, final fire size, and a point location at least as precise as Public Land Survey System (PLSS) section (1-square mile grid). The data were transformed to conform, when possible, to the data standards of the National Wildfire Coordinating Group (NWCG). Basic error-checking was performed, and redundant records were identified and removed, to the degree possible. The resulting product, referred to as the Fire Program Analysis fire-occurrence database (FPA FOD), includes 2.17 million geo-referenced wildfire records, representing a total of 165 million acres burned during the 27-year period. While not part of the original fire reports, record identifiers that can be used to link to related wildfire data products, including a national dataset of satellite-derived fire perimeters and an operational situation-reporting dataset, were also included for a subset of the fires.

While necessarily incomplete in some aspects, the database is intended to facilitate fairly high-resolution geospatial analysis of United States wildfire activity over recent decades, based on available information from the authoritative systems of record. The database was developed to support the national, interagency Fire Program Analysis (FPA) system, but has widespread utility in the fields of wildland fire science and management as well as areas of ecological and geophysical research, including the carbon and climate sciences. 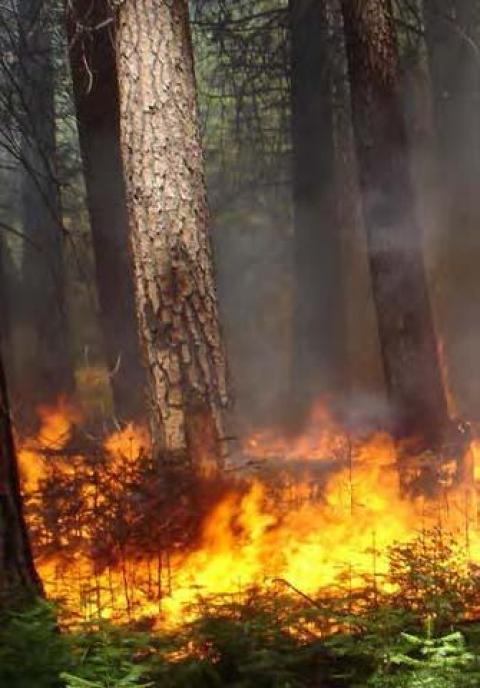 Fire moving through a ponderosa pine forest. The “cat face” or fire scar on the ponderosa pine reveals that this tree has survived several past fires.
(Credit: Photo courtesy of Ilana Abrahamson / FFS.)