Charles (Chuck) W. McHugh has been a Fire Spatial Analyst for the Rocky Mountain Research Station, Missoula Fire Sciences Laboratory, since June 2002. He started his Forest Service career in 1981 as a seasonal employee on the Mt. Hood National Forest in Oregon. During that time, he held various positions in timber management, silviculture, fire, and wildlife management performing a wide variety of duties. In early 1989, he received a term appointment as timber sale marking crew foreman on the Barlow Ranger District, Mt. Hood National Forest.  In late 1989, he accepted a permanent full-time position on the Peaks Ranger District, Coconino National Forest, located in Flagstaff, Arizona, as the timber sale layout technician for the District and was promoted to District Presale Forester/GIS Coordinator in 1990.  During the period 1997-2002 he served as the FARSITE Coordinator for all National Forests in Arizona.  His duties included development of FARSITE geospatial data layers as well as model and data evaluation.  This work was completed for the Kaibab, Coconino, and Apache-Sitgreaves National Forests.  Throughout his time as a seasonal and permanent Forest Service employee, Chuck has worked in fire suppression as a crew member, Type-4 IC, and as members of regional Type-2 Incident Management Teams (IMT), Wildland Fire Use Incident Management Teams,  and as a member of a Southwest Type-1 IMT (2000-2002).

Chuck’s current research involves geospatial fire modeling, historical burn probability analysis, and wildfire/fuel treatment interaction and effectiveness. He provides technical support to the National Fire Applications Helpdesk for FARSITE, FlamMap, and FireFamilyPlus. He has developed, coordinated, and taught local and national level workshops in the use of geospatial fire decision support systems, such as, FARSITE, FlamMap, and FSPro within the Wildland Fire Decision Support System (WFDSS). During fire season, he operates as a Long-term Fire Analyst (LTAN) in support of wildland fire management at the national, regional, and local levels often working with Type-1 and Type-2 Incident Management Teams in the development of long-term plans and fire analysis. Chuck serves as the research representative on the NWCG Sponsored Fire Use Subcommittee. 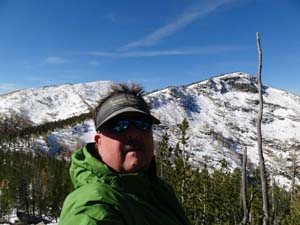