This project examined natural and human drivers of wildfires in areas contaminated by the Chernobyl explosion.

This project investigated the issue of radionuclide resuspension from wildland fires in areas contaminated by the Chernobyl nuclear power plant explosion. The work was originated from a scientific exchange among scientists from the USDA Forest Service, Ukraine and Belarus that was organized by USFS International Programs to assess science and technology gaps related to wildfire risk management. One of the products from that exchange was the development and application of a wildfire risk modeling system to predict likely hotspots for large fires and where wildfire ignitions will most likely result in significant radionuclide (Cesium, 137Cs) resuspension. The system was also used to identify locations for ignition prevention and strategic fuel breaks to reduce future emissions.

On April 26, 1986, a routine test of reactor #4 at the Chernobyl Nuclear Power Plant led to an explosion and 10-day fire. About 30 firefighters died during or shortly after from radiation exposure and more than 200 000 square km of Europe were contaminated with levels of 137Cs above 37 kBq m2. Over 70% of this area was in the three most affected countries, Belarus, Russia and Ukraine. Two exclusion zones were created around the reactor, one in Ukraine (Chernobyl Exclusion Zone, CEZ; 260,000 ha) and the other in Belarus (Polesie State Radioecological Reserve, PER; 240,000 ha) (Fig. 1) where access is restricted for purposes other than maintaining infrastructure and stabilizing the four nuclear power plants. The major radionuclide deposition from the reactor fire are Strontium and Cesium, both of which have slowly settled into the duff and upper mineral soil horizons in the field and forest. These radionuclides travel through the nutrient cycle much like phosphorous and potassium and concentrate in the duff and litter. Wildfires re-suspend the radionuclides where they pose localized health risks to firefighters, and are also transported over long distances in smoke particulates.

On surface fires, most radionuclides are redeposited within a few miles of the fire. However, large crown fires can send convection columns 3 or more miles (5+ km) into the atmosphere, and winds can transport the re-suspended radionuclides over enormous areas. Several large fires in the Chernobyl Exclusion Zone in 2015 redistributed contaminants to an area ranging from France and the British Isles, and deep into Russia. Fire-related emissions of radionuclides from the Chernobyl disaster are a social and ecological problem with ramifications for much of Europe and Russia. Solutions will require improvements to risk management systems in the region as well as short- and long-term mitigation measures in the Chernobyl Exclusion Zone.

To support the development of a comprehensive wildfire risk management plan for the contaminated areas and the newly created UNESCO Chernobyl Biosphere, we developed a wildfire risk modeling system for predicting likely locations of large fires in the Chernobyl Exclusion Zone and estimated the potential for radionuclide resuspension.

The study area included contaminated areas in both the Polesie Radioecological Reserve in Belarus and the Chernobyl Exclusion Zone in Ukraine. Most of the study area was in forests (including degraded Scots pine plantations) or in abandoned farmfields that are now slowly transitioning to hardwood forest. A key part of this study was understanding how patterns of ignitions contributed to potential radionuclide emissions.

The research team created a comprehensive ignition map using a wide range of data sources; they then compared the map to zones of different human activities within the exclusion zones. The ignition data were then coupled with historical weather and fuels data and fire simulation software to simulate 10,000 wildfires and generate maps of fire likelihood and potential emissions. The research team then used the fire simulation system to examine how fuel breaks, in combination with suppression activities, could reduce fire size and resuspension. Although the Chernobyl Exclusion Zone has a network of fuel breaks, most of them are overgrown because they are not well maintained.

The modeling revealed that potential fire size and emissions were larger in the Belarusian Polesie Radioecological Reserve but that wildfire and resuspension were far more likely in the Ukrainian Chernobyl Exclusion Zone due to lax controls on entry and human activities. By reducing the incidence of human-caused wildfires in the Polesie Radioecological Reserve, Belarus has shown the effectiveness of fire prevention in mitigating the risk of wildfire and the corresponding contaminant resuspension and redistribution. Analysis of fuel breaks revealed optimal locations in terms of reducing potential resuspension; such locations corresponded to areas of high ignitions, high potential for large fires, and high levels of radiocesium contamination. The areas at greatest risk were concentrated in the southern and southwestern parts of the Chernobyl Exclusion Zone.

Developing a comprehensive fire management plan for the Chernobyl Biosphere is the logical next step in meeting the potential wildfire threat. The plan should combine fire prevention measures with better fire detection and steps to improve local capacity for safe and effective initial and extended attack. The plan should also have a fuels management component, including fuel breaks and restored native riparian, wetland, and hardwood forest ecosystems.

One of the foundations of a fire management plan is a system to forecast and short- and long-term fire danger and risk to inform suppression and longer-term management of fuels. In ongoing work we are combining data from historical ignitions, wildfire simulation, and climatology to forecast spatiotemporal ignition patterns in the contaminated areas at a scale that is useful for managers concerned with fire prevention and fire danger prediction programs. The results can be used to: 1) forecast fire danger; 2) forecast suppression danger to firefighters in terms of contamination; 3) allocate fire detection and suppression resources to specific locations during the fire season; 4) prioritize fuel breaks along specific road segments that have high predicted ignition rates and the potential to generate fires that re-suspend radionuclides; 5) inform ignition prevention programs; and 6) parameterize wildfire simulation models to test how changing land use and climate change may affect spatial patterns in future risk. 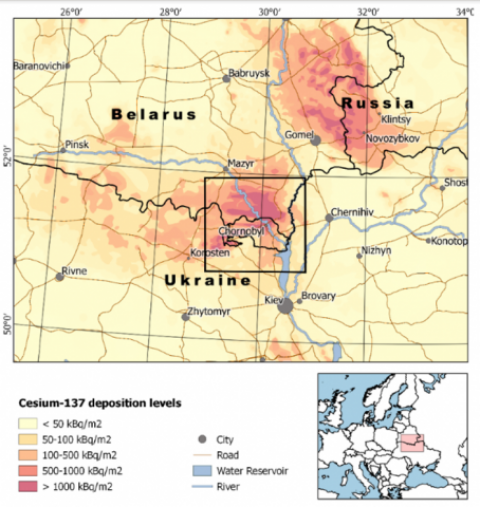 Map of study area showing cesium-137 deposition levels from the reactor explosion in Ukraine, Russia, Belarus, and the simulation study area around the Chernobyl exclusion zone. 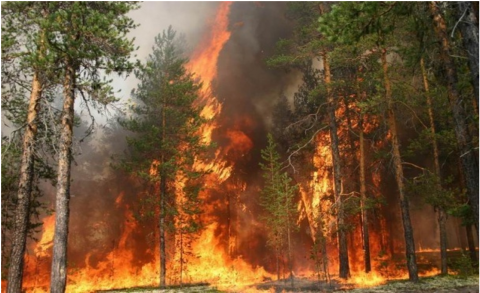 Crown fire in a scots pine stand within the Chernobyl exclusion zone during a wildland fire in August 2015. Radionuclide emissions from this and other recent fires have been detected thousands of miles from Chernobyl. 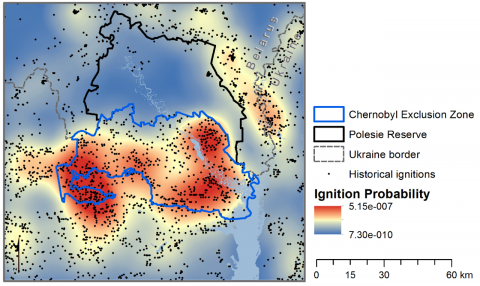 Map of historical ignitions from 1992 to 2016 overlayed on a smoothed ignition density map used in the wildfire simulations. Most if not all ignitions are human caused. Note the absence of ignitions in the Polesie reserve where access is tightly regulated.