Both firefighters and fire scientists have observed a period of peak crown fire activity in the Great Lakes area during spring when a dip in foliar moisture content occurs. For decades, the cause and timing of this ‘dip’ have been poorly understood. It is therefore important to understand the drivers of this dip in order to improve wildland firefighter preparedness and situational awareness during a period of dynamic fuel changes.

Working with local firefighters, FFS Research Ecologist Matt Jolly led a group of collaborators from the Wisconsin Department of Natural Resources, the Minnesota Department of Natural Resources, the Michigan Department of Natural Resources, the Huron-Manistee National Forest, the Eastern Area Fire Science Consortium, and the University of Wisconsin-Stevens Point, to develop a sampling scheme to determine the causes of spring moisture content changes and to determine their effect on flammability. Foliar samples were taken from red pine and jack pine at seven sites in three states throughout the 2014 growing season and needle moisture, chemistry, heat content, and flammability were determined in the laboratory. During that time, local firefighters documented fire behavior on wildland fires throughout the study area. Results indicated that foliar chemistry, rather than absolute foliar water content itself, drove the apparent changes in measured live foliar moisture content.

Results confirmed that the period of highest flammability occurred during the moisture content dip and was coincident with the timing of the most extreme fire behavior observed by local firefighters. Fire seasons in the Great Lakes occur rapidly after snow melt and the timing of both snowmelt and this needle moisture dip can vary by more than a month from year to year. These data are being used to develop tools that can assess crown fire potential in these dynamic forests based on live and dead fuel moisture conditions. Additionally, in collaboration with scientists from Los Alamos National Laboratories, our field sampling results were used to perform a series of numerical experiments using the fire behavior model FIRETEC, which is based on computational fluid dynamics. Changes in foliar density can lead to dramatic increases in the energy release and area burned by fires during the spring dip period. This information will help Great Lakes firefighters better prepare for and respond to wildland fires. 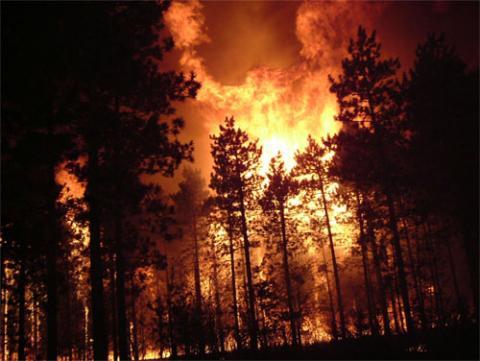 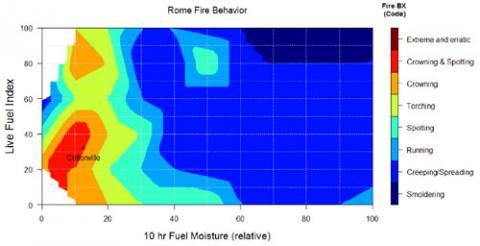 Graph showing the likelihood of crown fire based on fine dead fuel moisture and phenological conditions estimated from the Live Fuel Index. The Cottonville Fire noted on the graph was one of the largest fire ever recorded in that part of Central Wisconsin.